Can Preschoolers be taught a second language? > 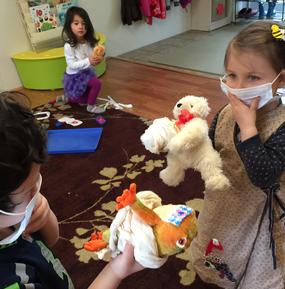 Learn more about the benefits of second-language acquisition at ACTFL >

It is our goal to provide children with engaging language learning experiences in a warm and nurturing environment. In genuine contexts, children are immersed in storytelling, music signing, art making, lunch cooking, drama acting and game playing. We focus on what children are able to do, thus build their self-confidence. We aim to guide them on a self-discovery path to acquiring Chinese Mandarin in the most natural way.
We believe that acquiring a second language at a young age offers children many benefits. As the American Council on the Teaching of Foreign Languages (ACTFL) puts it: "Knowing other languages and understanding other cultures is a 21st Century skill set for American students as they prepare to live and work in a global society." Additionally, "foreign language learning is much more a cognitive problem solving activity than a linguistic activity, overall. Studies have shown repeatedly that foreign language learning increases critical thinking skills, creativity, and flexibility of mind in young children. Students who are learning a foreign language out-score their non-foreign language learning peers in the verbal and, surprisingly to some, the math sections of standardized tests. This relationship between foreign language study and increased mathematical skill development, particularly in the area of problem solving, points once again to the fact that second language learning is more of a cognitive than linguistic activity."